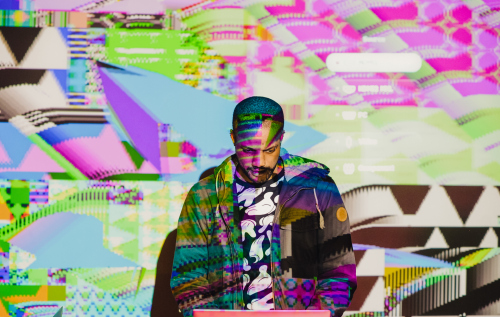 Antonio Roberts is an artist and curator based in Birmingham, UK, working primarily with video, code, and sound. He is critically engaged with the themes surrounding network culture and in his practice explores how technology continues to shape ideas of creation, ownership, and authorship. As a performing visual artist and musician he utilises live coding techniques to demystify technology and reveal its design decisions, limitations, and creative potential. 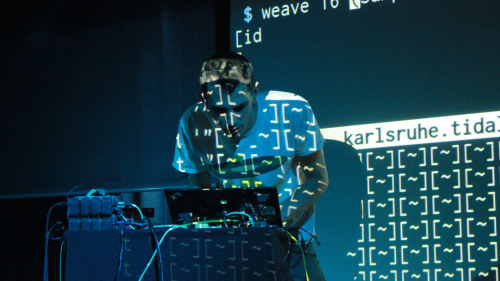 Alex McLean is an interdisciplinary researcher, software artist and musician based in Sheffield UK, working on interfaces for exploring Algorithmic Pattern, including the free/open source TidalCycles environment for live coding music, and weaving technologies as part of the five year ERC PENELOPE project lead by Ellen-Harlizius Klück in Deutsches Museum, Munich. He is active across the digital arts, including co-founding the TOPLAP and Algorave live coding/algorithmic music movements, the international conferences on live coding and live interfaces, and the AlgoMech festival of algorithmic and mechanical movement.

(Afro|Algo)futures is being run as part of the AHRC funded research project, Music and the Internet: Towards a Digital Sociology of Music. DIGSOCMUS is an interdisciplinary research project that aims to provide the first comprehensive analysis of the changing cultural roles of the internet in electronic music. The project takes as its historical focus a twenty-year period ranging from the early take up of the world wide web to the present day world of social media platforms, and aims to understand the extent to which uses of the internet have affected or contributed to

(Afro|Algo)futures is co-organised with FoAM Kernow, a non-profit company working towards a world with equitable access to knowledge, where thoughtful tools and interventions help us play with complexity and make better decisions, and environmental and social issues are centred and addressed with urgency.

The project is run in partnership with Vivid Projects, a non-profit company supporting media arts practice. Founded in 2012 and based in Birmingham, we encourage innovation, risk and experimentation in artistic practice. We are committed to a diversity of practice and encourage historic and contemporary engagement with cultural and sub-cultural histories. Our work is made public through an ambitious programme of events and exhibitions on and off-site, created in collaboration with artists, producers, thinkers and researchers.

Christopher Haworth researches the history of electronic music as it is practiced, theorised, taught and experienced, and he does this using a mixture of historical, ethnographic, interpretive and data-driven methods.

Ed Spencer researches Electronic Dance Music (EDM) and its entanglements with the Internet. He explores EDM memes, trolling practices, and the record label PC Music. His work is interdisciplinary and involves methods such as digital ethnography, webometrics, and analysis of music and the moving image.